John, I wanted to
send a quick note because we have until later today to make any last TV ad
reservations that will run in the final, critical days before the
election.

Can you make a donation today to help us reach key voters in this toss-up
race?
[ [link removed] ][link removed]

Even after this deadline passes, we have some last minute expenses that
your donations will help fund. We’re planning to knock thousands of doors
between now and Election Day using both paid canvassers and volunteers.
And we’re ramping up our digital ads—we just had to up our spend on Google
Search to keep our results ahead of a deceptive Republican super PAC's.

We are only able to compete with the $9 million in outside Republican
spending because of donations from supporters. Our average donation is
$25. And because Republican groups have far outraised Democrats’ we rely
100% on donations to our campaign, while our opponent is completely
reliant on Kevin McCarthy’s super PAC to run his attack ads.

I am so grateful for your support. I truly could not compete in this race
without you, and in a district that Governor Newsom won by only one point
in last year’s election, we have to do everything we can to ensure we keep
this swing-seat blue. 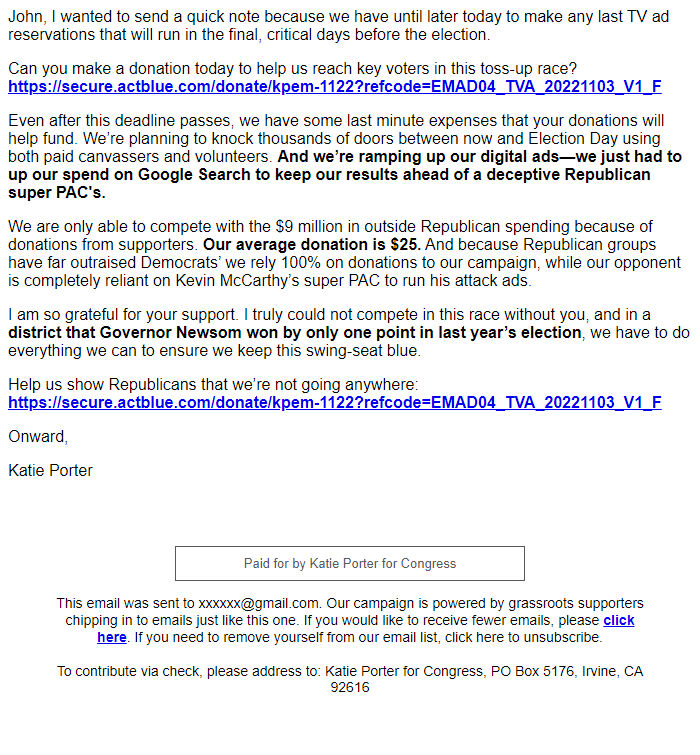