Do you agree with SCOTUS’ decision to overturn Roe v. Wade?

Not only has the right to abortion been lost at the federal level, but many anti-abortion lawmakers – including too many of my Pennsylvania colleagues – have rushed to implement statewide abortion bans that put women at risk.

We won’t stand for it – but look at Kansas. Years ago, it was the epicenter of some of the most extreme anti-abortion activities in the country. Yet in a referendum vote the other week, abortion rights supporters celebrated a resounding victory. While we know our fight doesn't start and end at the polls – voting remains one of the most powerful tools for all of us to hold politicians accountable and influence policy.

That's why as a mom, teacher, and congresswoman, I have been fighting relentlessly for women, making sure they have equity and the fundamental right to make their own health decisions. I know it's been a long summer in the fight for reproductive freedom, but we need to continue to fight back and build majorities that will codify Roe v. Wade once and for all.

Abortion access is essential and lifesaving – and I will never stop fighting for it. I need to know that you’re with me:

Do you agree that we need to codify Roe v. Wade?

There's more work to be done,

Emails are a crucial way for us to stay in touch with our top supporters; however, we understand if you need a break from political emails right now. If you'd like to pause emails for the next few weeks, you can click here: [link removed]

Chrissy is a former Captain in the United States Air Force. Use of her military rank, job titles, and photographs in uniform does not imply endorsement by the Department of Defense or Department of the Air Force. 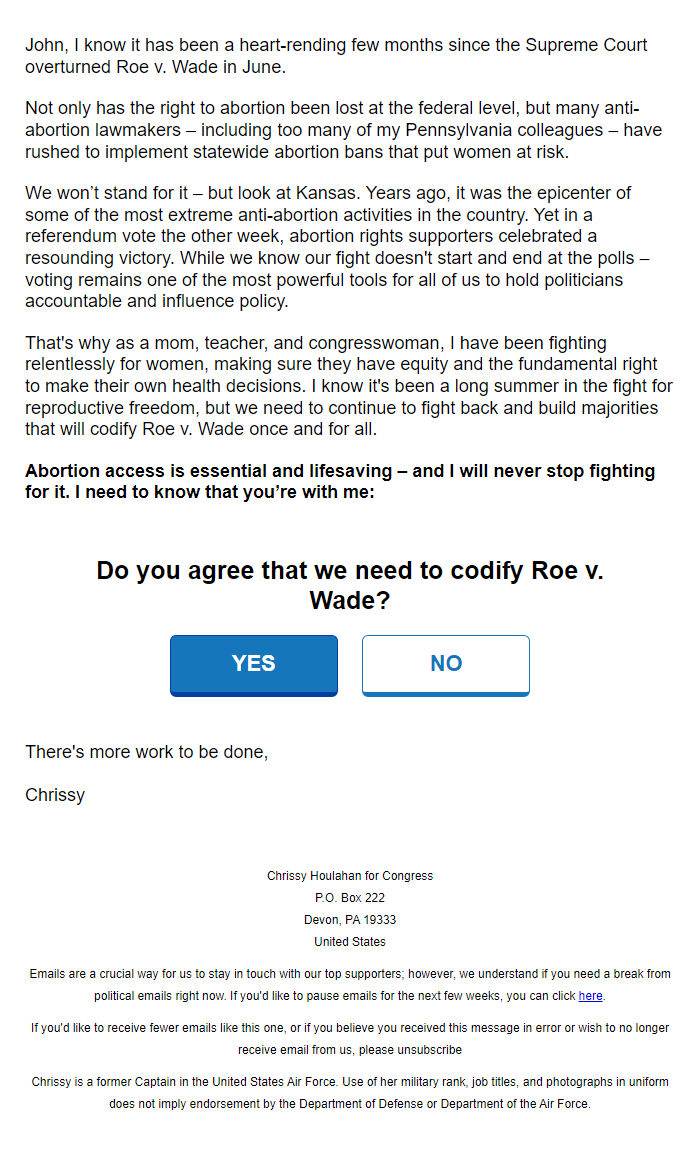