We can beat JD Vance and win Ohio

Decision Desk, a leading election forecaster whose models have been very accurate, now says Democrats are favored to win the Senate majority. And one of the key states will be flipping the Ohio Senate seat, where Tim Ryan is locked in a tight race against JD Vance.

Every time Vance opens his mouth, it becomes more and more clear to Ohio voters that he’s just too extreme. The people around Vance are trying to keep him as quiet as possible, because every time he talks, he does things like suggest that women should stay in violent marriages for the sake of their kids. (This was just in the last few days).

The contrast with my friend Tim Ryan is really striking. Tim’s running a phenomenal campaign, and he knows how to talk to the rural and independent voters that will decide Ohio. He just knows how to connect with people, listen to them, and when he says he’ll go to work for them, he means it.

We’ve got to help Tim beat Vance and expand our Senate majority. Will you join me and support Tim’s campaign today – and help me elect Democrats like Tim nationwide? [[link removed]]

Polls are showing Tim anywhere from two to four points ahead of Vance. But you and I both know how close things can get.

The more pressure we can put on Vance, the more he’s going to feel compelled to open his mouth, and the more Ohio voters will learn the truth. Meanwhile, Tim’s going to keep running a great campaign and have the kinds of conversations about kitchen table issues that Ohio voters want to hear. That’s the recipe for victory.

Tim’s got the momentum. It’s up to all of us to help him win. [[link removed]]

Thank you for all your support.

Paid for by Right Side of History PAC. Not authorized by any candidate or candidate's committee.
This message was sent to: [email protected]
Mailing address: 1751 Potomac Greens Dr.
Alexandria VA, 22314
We believe that emails are a crucial way for our campaign to stay in touch with supporters like you. However, if you'd like to unsubscribe, you can do so here: unsubscribe: [link removed] Thanks for your support!
[images/spacer.gif] 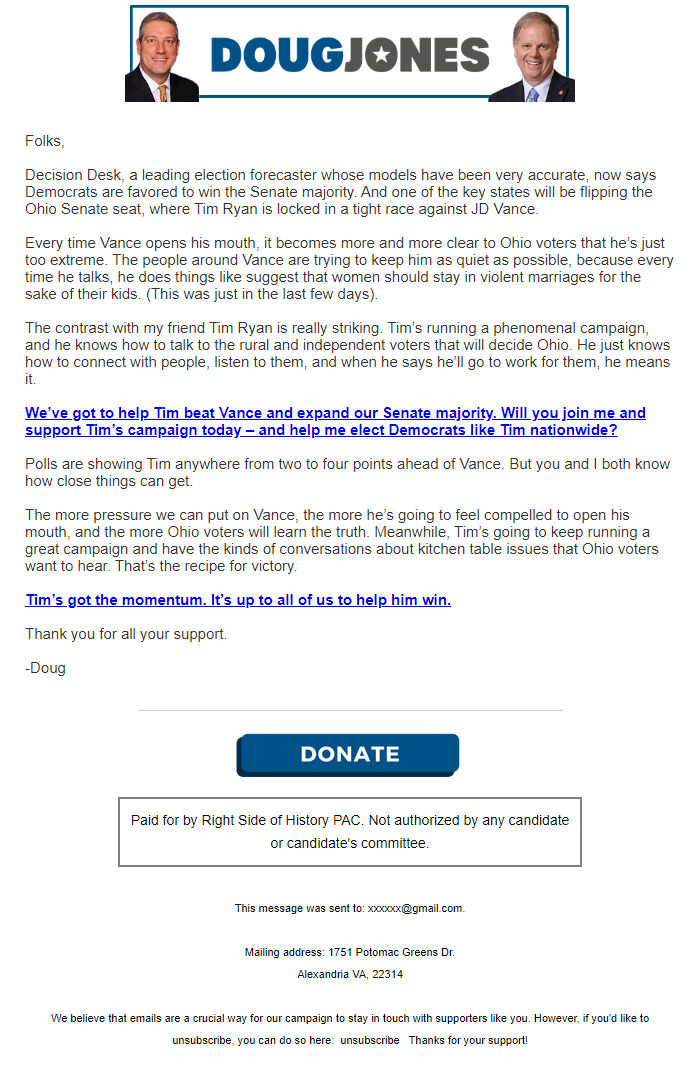