Do you want cleaner air?

Last month, OLCV and Oregonians for Clean Air filed a new ballot measure—the Toxics Reduction and Right to Know Act. This measure would close loopholes for corporate polluters, requiring them to reveal the toxic emissions polluting our air, water, and soil. Today, we submitted a petition with over 1,300 signatures, bringing clean air and a healthier climate one step closer to the ballot box.

The Toxics Reduction and Right to Know Act is one of three ballot measures that will help put climate action into the hands of Oregonians in 2020. Our priority is to get the Clean Energy Jobs bill passed during the 2020 legislative session, but, if Oregon’s leaders let us down once again, we’ll have the chance to vote for a transition to clean energy and a shift away from the environmental toxins that are putting our families at risk.

Will you join us in standing up for Oregonians? Sign up to show up for the climate in 2020, and encourage your legislators to do the same [[link removed]].

As OLCV’s Executive Director, I chose to be one of the chief sponsors for the Toxics Reduction and Right to Know Act not only because it aligns with OLCV’s values, but because it aligns with my own. For the past few years, I’ve been coaching my son Liam’s youth soccer team. Toxins like arsenic, mercury, and lead pose a high risk for children, and we’ve had to cancel soccer practice multiple times because of Portland’s poor air quality.

The health of our children and our communities is more important than the loopholes that allow corporations to continue emitting dangerous toxins into our air and water. My son and his friends should be able to play outside without breathing in toxic levels of arsenic and cadmium. Our kids deserve better.

Likewise, the climate crisis is reaching a tipping point. Liam is going to inherit a world that’s unlike any humans have ever lived on before. He’ll grow up in an Oregon where the summers are veiled in wildfire smoke. An Oregon where water is scarce. An Oregon where the Cascade Mountains are dark, and the snow is thin. An Oregon where he has to wear a breathing mask to go outside. That’s not the kind of world I want to leave for my son.

Luckily, there’s still time to act. 2020 will be the year of climate action. Whether through legislation or through the ballot box, we’re going to hold polluters accountable, both for their greenhouse gas emissions, and for polluting our air, water, and soil. We hope you’ll join us in taking the climate pledge, and signing up to show up in 2020 [[link removed]]. Together, we can leave a better world for the next generation.

Staying in touch via the Oregon League of Conservation Voters’ email list is the best way we have of keeping in regular contact with supporters like you and letting you know about the ways you can take action to protect the environment. You can [link removed] from our supporter list, but if you leave, it will be harder for you to stay involved with OLCV and continue the work that you’ve been such a critical part of. OLCV wins environmental policy fights and elections because of dedicated activists like you, and we’d hate to see you go. 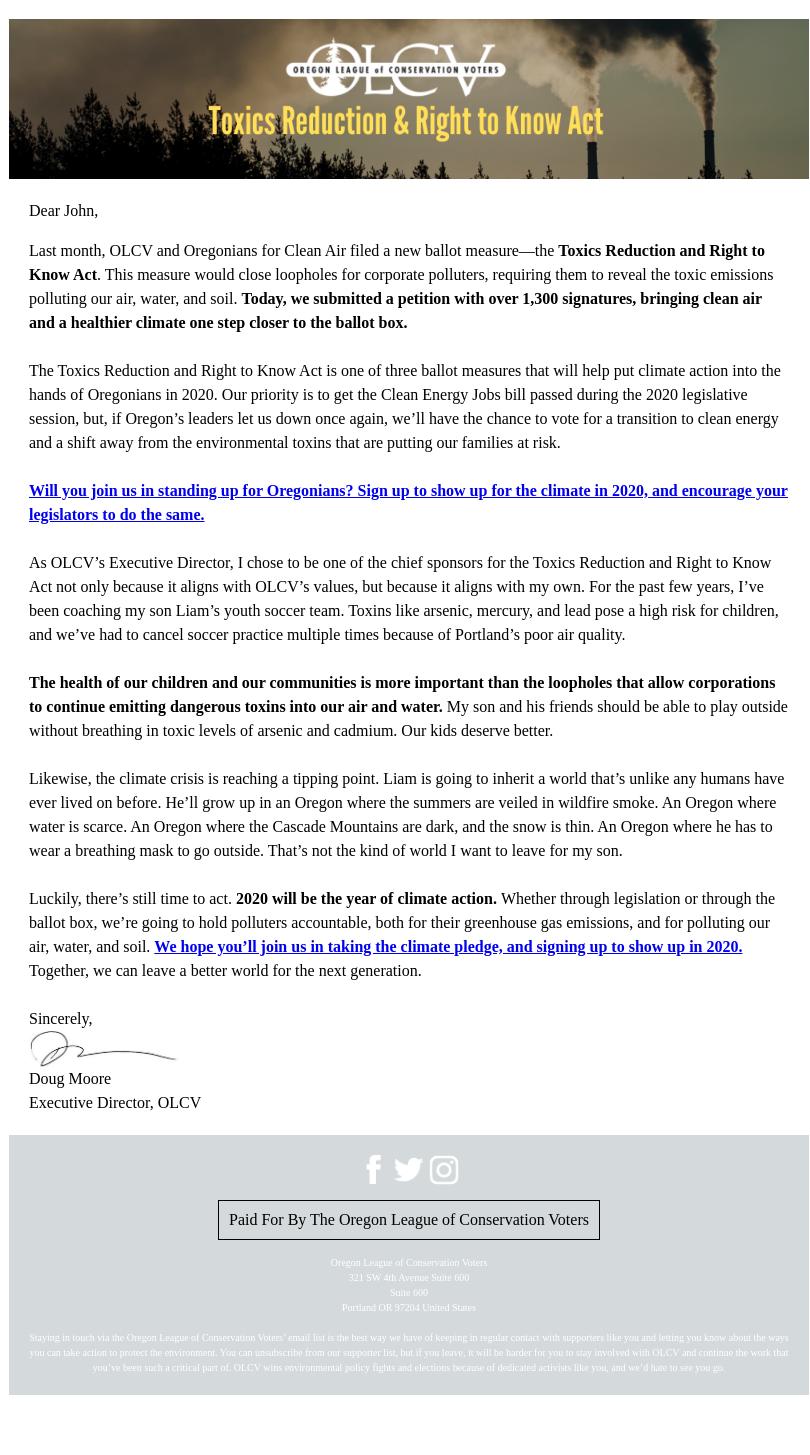