I am overjoyed to see President Biden’s nominee, Ketanji
Brown Jackson confirmed as our next Supreme Court Justice!

Justice Jackson is an exceptionally accomplished legal
mind and the depth and breadth of her experience in the justice
system is unparalleled on the Court.

In fact, she has more years of experience as a judge
than four of the sitting Justices. She is the most experienced
trial court judge to join the court in nearly a century. She
joins Justice Sotomayor as the only other sitting justice to
serve at all three levels of the federal judiciary.

As the first Black woman and the first public defender
in the history of the Court, Justice Jackson’s appointment is a
significant and historic step towards making SCOTUS more
reflective of America.

Aside from her obvious qualifications, Justice Jackson’s
grace throughout the confirmation process – while facing bitter
GOP interrogation and cheap demagoguery – was utterly admirable.
Her temperament is clearly more befitting of what we expect from a
Supreme Court Justice than the overwhelming antipathy displayed
by the last two Justices, Trump nominees Amy Coney-Barrett and
Brett Kavanaugh.

It is a relief to know that Justice Jackson will play a
role in determining whether the Republican assault on our
Constitution will succeed in rolling back the freedoms at the
core of our democracy – especially as Roe v. Wade and a woman’s
right to choose hang in the balance.

Equally important is the perspective Justice Jackson has
on criminal justice reform. As the only public defender to ever
serve on the Court, she brings first-hand experience with the
racial and economic inequities in our justice system.

Her appointment strengthens the Court’s legitimacy and
gives me hope that SCOTUS can return to being a true arbiter of
justice – instead of a partisan puppet theater.

I’d like to know how you feel about Justice Jackson’s
historic appointment, John. Will you
reply to this email and let me know?

Congressman Jared Huffman represents California's 2nd District,
which spans from the Golden Gate Bridge north to the Oregon
border. As a Democratic leader, Jared is committed to protecting
our environment, fighting for access to affordable healthcare and
equality for all Americans. In accordance with public health
guidance from the Centers for Disease Control, Jared has
suspended all in-person campaign events and is relying on support
from his grassroots contributors to power his campaign. Click
here
( [link removed] )
to support Jared's campaign with a contribution today, or sign
on to become a sustaining supporter by making a monthly
contribution.
( [link removed] )

If you believe you received this message in error or wish to
no longer receive email from us, please [link removed]. 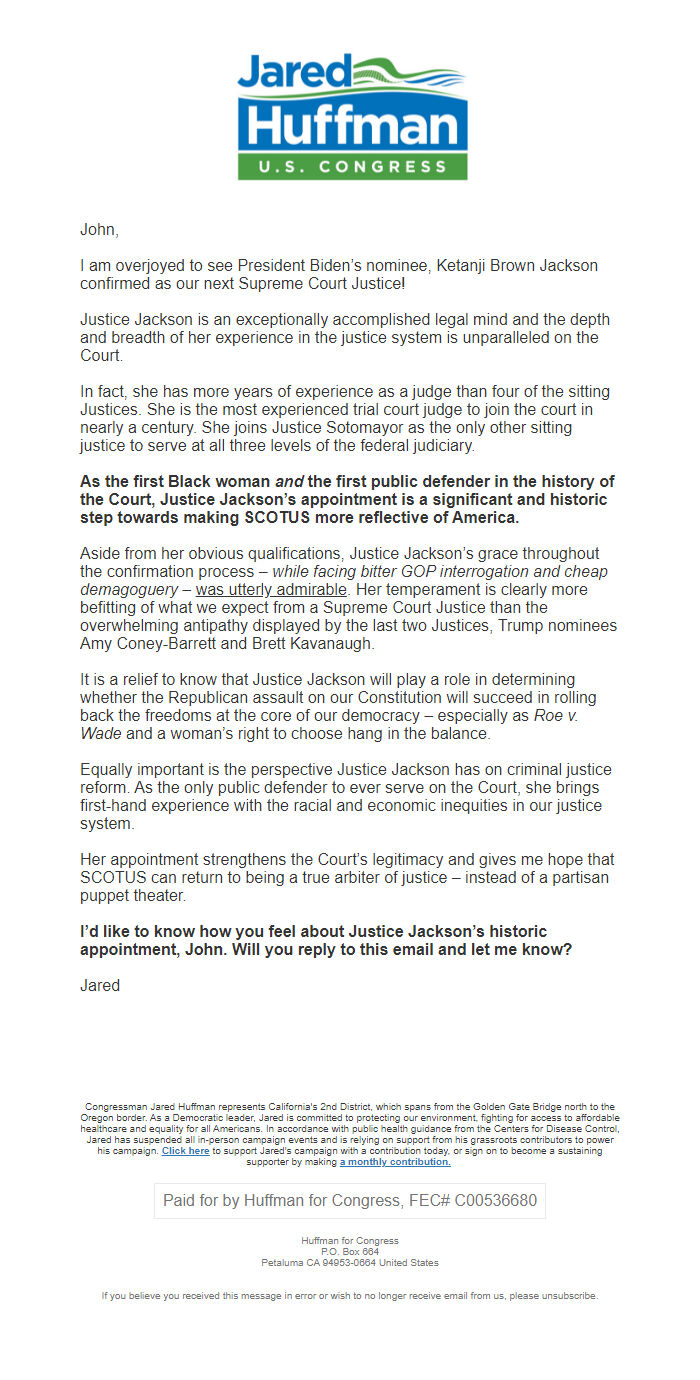