Without Even Declaring Candidacy, Gov. Cuomo Within Striking Distance of Democratic Primary Nomination

Did you hear? In the last few weeks two public polls put Governor Cuomo in striking distance to win the Democratic primary if he chose to run.

First, an Emerson University poll earlier this month found that he was “ neck and neck” [[link removed]] with his top contender, and just yesterday, a separate survey released by Siena College Institute showed the race tightening significantly [[link removed]] – turning from a blowout in a multi-candidate field into a single-digit contest if Governor Cuomo entered it. Siena's poll shows Governor Cuomo winning handily amongst African Americans, ahead with Latino and moderate democrats, dead even with New York City voters and within a margin of error with women and union households.

Now, each poll uses a different methodology and no two pollsters ever measure public sentiment the exact same way. However, taken together, the truth is undeniable: Governor Cuomo has a real and unassailable record of results [[link removed]] that improved people’s lives.

Governor Cuomo was sent to Albany to fight a dysfunctional legislature and deliver for you with new reforms like marriage equality, a $15 minimum wage, the strongest paid family leave program in the nation, free public college tuition for the middle class and the toughest gun laws in the country. Governor Cuomo didn't just talk -- he delivered new airports, bridges, and train stations, rebuilding this state’s infrastructure from the ground up.

Along the way, he made plenty of enemies with the Albany elite [[link removed]] , and when they saw their moment, they didn’t hesitate to weaponize the levers of government to accomplish what they couldn't at the ballot box and use false, exaggerated and misleading claims to push him out of office.

But after the dust cleared six district attorneys [[link removed]] examined the allegations made against the Governor and one by one they each came to the same conclusion: no laws were broken, no jury would believe the claims, and not a single case was brought.

We always said we wouldn’t rest until everyone knew the facts and it's clear that more and more New Yorkers are starting to understand the politicization and the corruption of government that was at play here. According to the Siena poll released yesterday, when asked if you believe the allegations against [[link removed]] Governor Cuomo, less than 50% of Democrats, New York City residents and Hispanic New Yorkers believe the claims -- and only 29% of African American New Yorkers buy what Albany politicians were peddling.

Team Cuomo thanks everyone for their kind words, friendship, and support during the last months and especially over the last several weeks. He remains in service to the people of this great state and is considering all of his options for the future.

Paid for by Andrew Cuomo for New York, Inc.

If you believe you received this message in error or wish to no longer receive email from us, please unsubscribe: [link removed] . 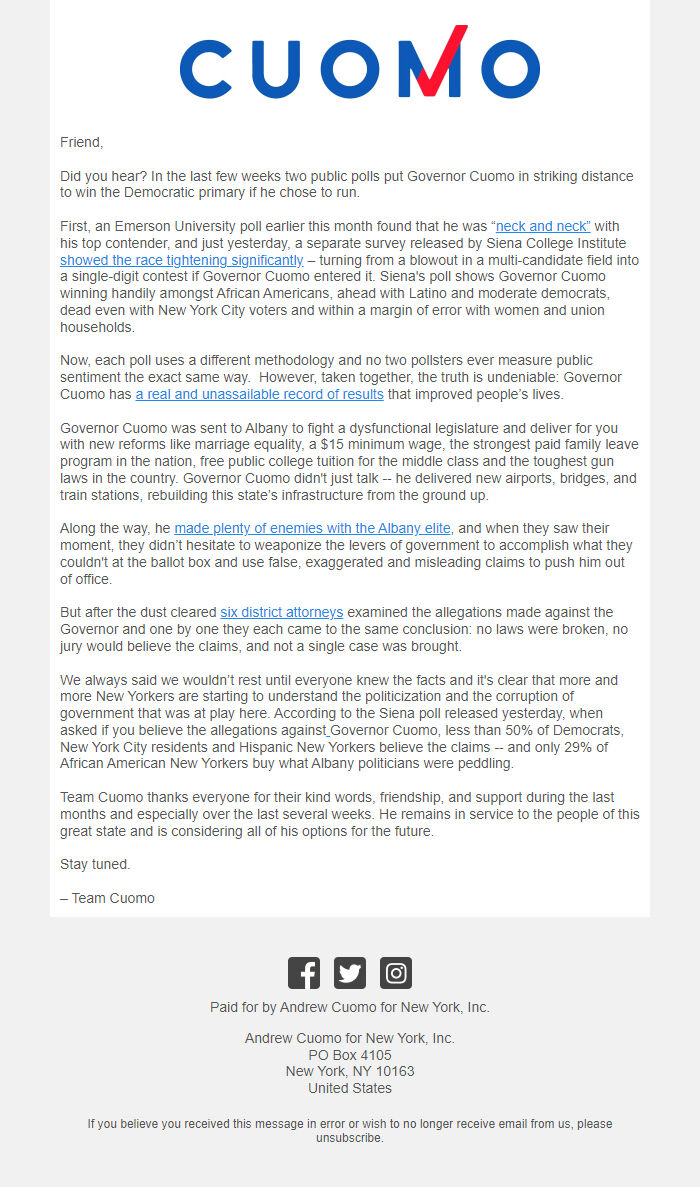