ARLINGTON, It's time to vote!

Arlington Young Democrats
Links have been removed from this email. Learn more in the FAQ.
Links have been removed from this email. Learn more in the FAQ.
arlingtonyoungdems.org [arlingtonyoungdems.org]Good Morning my fellow Arlington Young Democrats,
THE POLLS ARE OFFICIALLY OPEN IN ARLINGTON!
Today is the day that we have been working all year for. Currently we have made over 4000 voter contacts this season, and if you knocked a packet, made a phone call, and volunteered with us at least once this season, then you should feel damn proud of that.
But we still have 13 hours to get this and as I say before every election day, it's time to leave it all out on the field. We still have opportunities to bring this one home. If you are able to today, I highly encourage everyone to pick up at least 1 more shift. Whether it be door knocking, making last minute phone calls, taking a poll greeting shift, driving people to polls, or just texting your friends who you know still need to vote, it takes a village.
I'm not blowing smoke when I say this: this is the most consequential election. Full stop. There are people all over the country waiting to see what happens here. New Jersey is going to be fine. This right here is all that matters. What I don't want for myself and I don't want for you all is to sit there tomorrow night or wake up the next morning and say to ourselves, "If only I had done this, If only we had done that." You still have an opportunity to make it happen.
We have so much on the line in our Commonwealth. Since Democrats have taken the majority, they have delivered:
Expanding voting rights
Raising the minimum wage
Increasing teacher pay
Passing the most robust Climate Change action plan in the South
Abolishing the Death Penalty for the first time in the South
Becoming the first state to legalize marijuana in the south
Banning discrimination against the LGBTQ+ Community
Banning conversion therapy
Ratifying the ERA
Passing common sense gun safety reform
Repealing anti-abortion laws
Expanding access to healthcare and medicaid
Making the criminal justice system more just
Passing bipartisan legislation to get kids back to school during COVID
And we cannot give all of that up. The Republicans have already sworn to undo all of that progress and we just can’t leave this to chance. So I’m asking you right now to get out and vote if you haven’t already, and forward this message along to 5 of your friends. We have to turn out and elect Terry McAuliffe, Hala Ayala, Mark Herring, and all of our Democratic nominees to the 100 seats of the House of Delegates.
When young people turn out and vote, Democrats win. The Post-Schar poll found that voters between the ages of 18-39 support Terry McAuliffe and the Democratic ticket by almost 10 points, and as we have said before, Millennials and Gen Z make up more than a third of the voting population. We can carry this election for the Democrats. We are the leaders we have waited for.
If you haven't already, make a plan to vote by going to iwillvote.com and get all of your networks to vote as well. Every single vote counts.
I'm putting my money where my mouth is. I have been up since 4:45 AM and got to the polls at 5:30 tomorrow morning and I will be shutting them down at 7:00 PM. That is how much this matters and what you all have done so far has been amazing, but we're almost there. It's time to put up or shut up y'all. Let's go put this thing to bed and show all the pundits, the armchair quarterbacks, and the Republicans that they gotta learn how to count if they keep counting us out like this.
LFGm,
Matt Royer
President
Arlington Young Democrats
[link removed] [[link removed]] [link removed] [[link removed]] [link removed] [[link removed]] arlingtonyoungdems.org [arlingtonyoungdems.org]
Arlington Young Democrats
1235 S Clark St #207,
Arlington, VA 22202
If you believe you received this message in error or wish to no longer receive email from us, please unsubscribe: [link removed] . 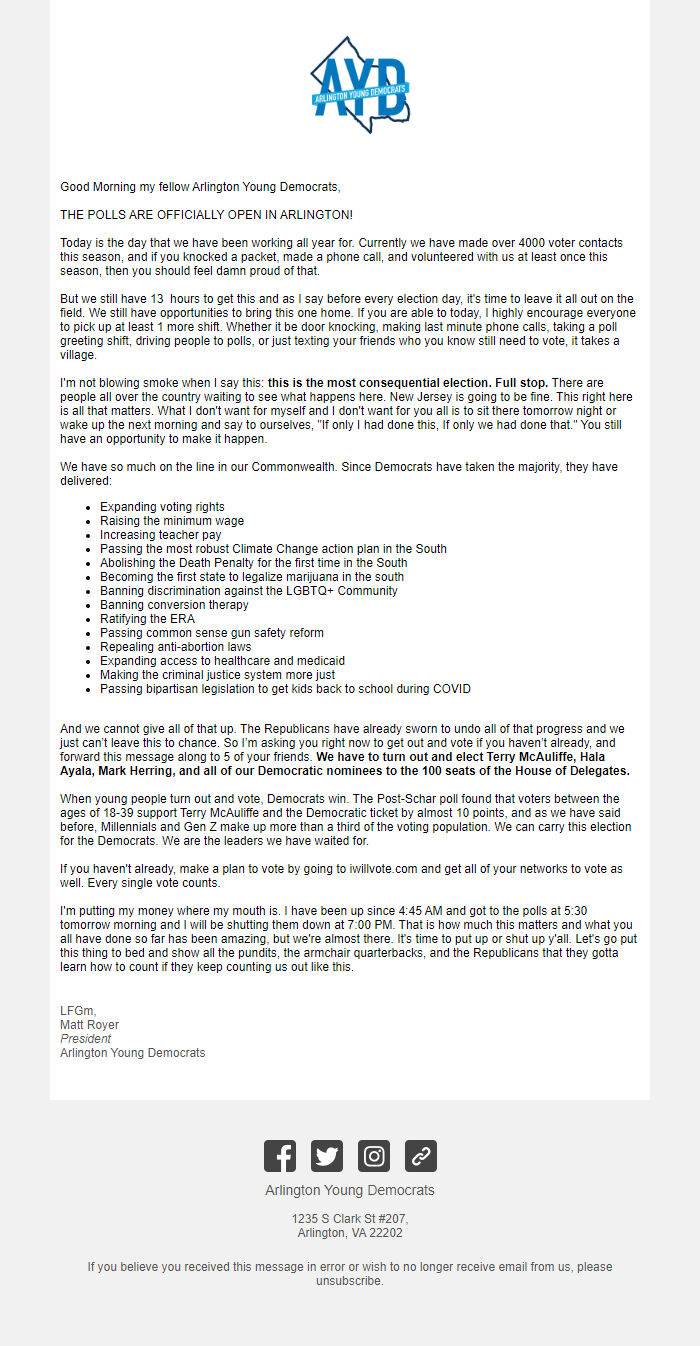