As you know, I have been considering a run for statewide office in 2022. After serious review, and in consultation with my family, I have decided that I will not be a candidate for any office in the next election cycle.

Many of you have heard me say that serving as the Mayor of Providence since 2015 has been the privilege of a lifetime. It is, quite frankly, my dream job. There is no clearer and more compelling way to give back to the community that I love.

Over the past year or so, as I have considered whether to run, two things have weighed most heavily in my mind. The reality is that it would be impossible to devote myself fulltime to a statewide campaign while at the same time giving my full attention to the work of running the city. There is simply too much to do to keep the city moving forward each day. And second, as a parent of a young child, I must prioritize family. Simply put, committing myself to a statewide campaign while at the same time fulfilling my responsibilities as Mayor and as a parent is not possible.

I believe the most appropriate metaphor for any person’s time in elected office is that of a relay race. While the baton is in my hands, I am committed and plan to sprint to the finish line and position the city so that the next mayor has the greatest chance of success. That is what folks before me have done, that is what I committed to when I first ran, and that is what I will do until my last day as Mayor.

We have come a long way over the past seven years and I want you to know that I will finish with the same intense work ethic and commitment to my City as I have always shown. Thank you all for your encouragement as I considered running for higher office. While it does not make sense for me to do so at this time, perhaps the conditions will be right at some point in the future. For now, I will never forget your unwavering support throughout this process. I am proud of the work we have done together and look forward to the progress we will continue to make until the next Mayor is sworn in.


If you believe you received this message in error or wish to no longer receive email from us, please [link removed]. 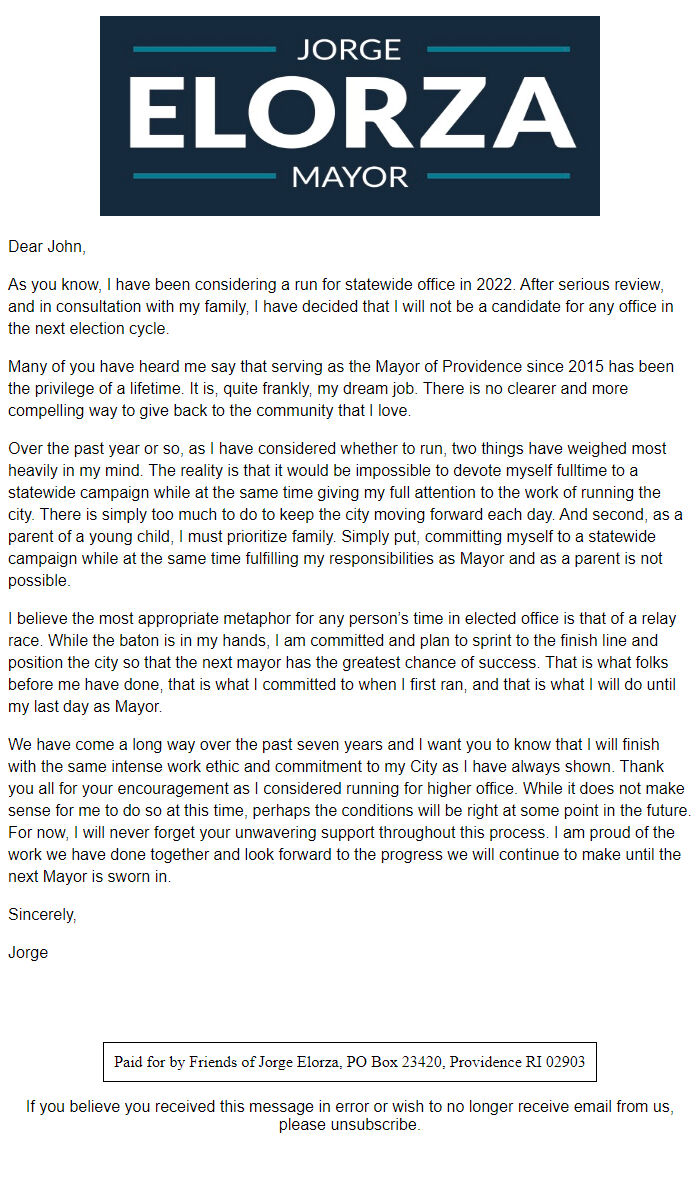