Heritage Foundation
Links have been removed from this email. Learn more in the FAQ.
Links have been removed from this email. Learn more in the FAQ.
Here is the Heritage Take on the top issues today.Please reply to this email to arrange an interview.
Marxist Nature of Black Lives Matter Exposed in New Book <[link removed]> – The George Floyd protests that have precipitated
great changes throughout American society were not spontaneous events. Americans did not suddenly rise up in righteous anger, take to the streets, and demand not just that police departments be defunded, but that all the structures, institutions, and systems of the United States—all supposedly racist—be overhauled. The 12,000 or so demonstrations and 633 related riots that followed Floyd’s death took
organizational muscle. The movement’s grip on institutions from the classroom to the ballpark required ideological commitment. Both were provided by the various Black Lives Matter organizations. This book examines who the BLM leaders are, delving into their backgrounds and exposing their agendas. They are shown to be avowed Marxists who say they want to dismantle our way of life. Along with their fellow activists, they make savvy use of social media to spread their message and organize marches, sit-ins, statue-tumblings, and riots. In 2020 they seized upon the video showing George Floyd’s suffering as a pretext to unleash a nationwide insurgency. Heritage expert: Mike Gonzalez <[link removed]>
Reflecting on 9/11: Taliban are stronger than they were in 2001 <[link removed]> – Because of the botched pullout, not only have America’s adversaries been emboldened, but America’s friends and allies are seriously questioning American resolve for future conflicts that we may find ourselves in. In the past two weeks, our Heritage Foundation experts have spoken to nearly 20 diplomats, including at least four ambassadors, and all have expressed the same concern about this administration and the stunning lack of American leadership under this president. The alienation of our allies couldn’t come at a worse time, as America also faces rising
threats from an increasingly adversarial Chinese Communist Party, from Vladimir Putin’s Russia, and from a nuclear-armed Iran that has for years pledged “Death to America.” However, the course that Joe Biden has set for America is not inevitable. On Sept. 11, 2001, the American people showed that we are resilient, determined, and strong. At this moment in our nation’s history—not just on this day, but every day going forward—we must resolve to stand unified against the forces that would seek to destroy us, and we must say to the world that the United States may bend, but we will never,
ever break. Heritage expert: Jim Carafano <[link removed]>
Workers are hurt when their employers struggle <[link removed]> – Politicians and bureaucrats could get
between employers’ and workers’ best interests by replacing performance-based pay with rigid pay schedules and imposing a one-size-fits-all federal paid family leave program that would crowd out more flexible and accommodating employer-provided ones. Moreover, the Biden administration’s blatant attempt to force workers into unions could
further drive up costs for taxpayers and consumers, limit job growth and make it harder for workers to achieve the flexible workplace policies they increasingly desire. Finally, the president’s planned corporate tax hike would give U.S. corporations the highest tax rate among the Organisation for Economic Co-operation and Development — a move that would especially hurt small businesses, with 85% of companies that would face tax hikes having only 20 or fewer employees. While the state of labor in 2021 is incredibly strong for workers, that will almost certainly change if
policymakers follow through on their plans to raise taxes, impose new regulations, and micromanage employer and employee relationships. Heritage expert: Rachel Greszler <[link removed]> 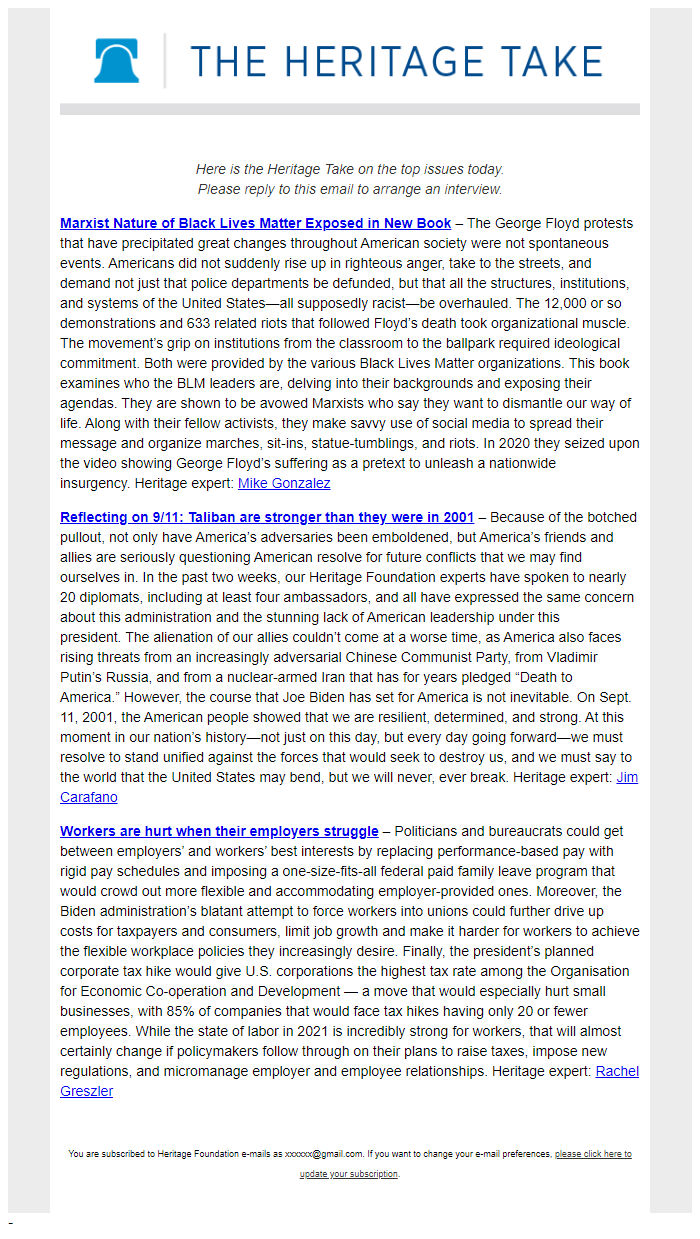