Veritas should win a Pulitzer Prize for its #ExposeCNN investigation. All
week long, they have been trickling out videos from their CNN
staffer-turned-whistleblower, Cary Poarch.
Poarch started at CNN in 2017 at what he thought was his dream job. He
entered a Democrat, he even supported Bernie in 2016, but what he saw at
the "most trusted name in news" made him squirm with unease.
The dishonesty he saw kept him up at night. At some point in 2019, he had
enough of the lies and turned to Project Veritas to help expose the
network's bias against President Donald J. Trump and Republicans.
Based on the clips, it is apparent that CNN President Jeff Zucker controls
everything the network does.
And everything the network does is designed to revolve around Trump and
making our president look as bad as possible.
Critics have argued that the guys on the clips were non-factors at the
company. Leftists said these were low-level guys with no real authority.
Well, that excuse has now gone out the window because as we learned
Thursday, Poarch recorded true veterans of the business who have been there
for decades.
The latest videos show that anybody who has been at the network knows that
it has shifted decidedly left and no longer reports the news.
Here is CNN field ops manager Patrick Davis in his own words, thanks to
Project Veritas.
"Patrick Davis, CNN's manager of field ops, has been at the network for 25
years he longs for the good old days," O'Keefe says in the video.
Based on Davis' opinion, the network's shift to the left is because of
Zucker, and he is not happy about it. As we know from earlier coverage,
Zucker dictates what CNN covers each day on a 9:00 am conference call.
Davis says he doesn't even listen anymore because it's just a waste of time.
"I haven't listened to a 9:00 am call in about 15 years," Davis said. "At
this point, I'm just, it's all bullshit, it's all bullshit. I wish that
wasn't the case."
Davis goes onto complain that the network isn't reporting actual news, but
focusing on ratings and left-wing media.
"All they gotta do is take an anchor, and put him at the desk, and tell the
news," Davis says. "But, we're so busy trying to get appointment
viewership."
He adds that what he wants them to do is, just "regular, day-in, day-out
telling the news" adding that CNN is "not gonna compete with Fox News or
MSNBC."
And then here's the whammy, confirming what we all know but that CNN
refuses to say, "We don't, even though we're totally left-leaning, we're
not, we don't wanna admit it."
Now, you may say these are just two guys over drinks. The quotes are
probably taken out of context. But Poarch now has another CNN employee on
video saying that when Zucker took over, they stopped covering the news and
turned to all Trump, all the time.
Aida Jacobs is a technical supervisor at CNN. She too longed for the good
ole' days before Zucker used the network to go after the president 24/7.
"We (CNN) used to be -- it was kind of boring, it was very, and I'm not
saying CNN was boring," Jacobs says. "But it was very like packages and it
was really just straight news."
"Just straight up news?" Poarch asks.
"Yeah, there wasn't as much opinion and panel, and the same people. It was
interviews. it was a lot of foreign leaders," Jacobs laments.
But, something changed. Or someone rather, Jeff Zucker became in charge.
"When Zucker took over, it wasn't until Trump that we ended up being all
Trump all the time," Jacobs says.
This video is very long. We'll go down and find the nitty-gritty parts for
you. But, there are hours and hours of this stuff, so be sure to keep an
eye on Townhall covering the Expose CNN project.
Here's the video in full: [link removed]


--
You are subscribed to email updates from "BLACK REPUBLICAN BLOG."
To stop receiving these emails, you may unsubscribe now:
[link removed] 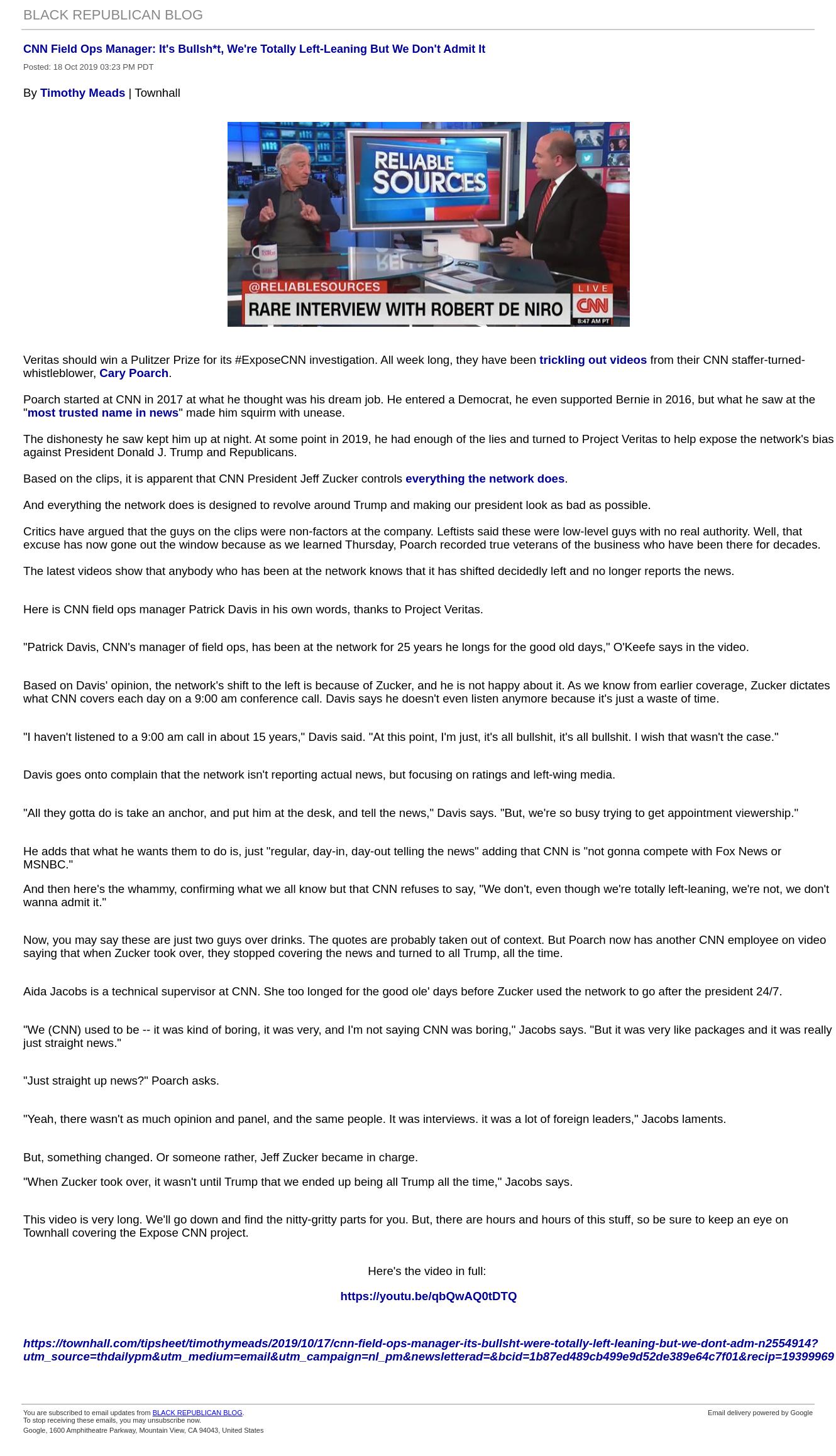