After leaked video footage showed two Exxon lobbyists bragging about their influence in Washington, we called on members of Congress to pledge never to hold closed-doors meetings with Exxon lobbyists.

Thousands of people sent letters to their representatives including in California’s 17th district. Soon after, Rep. Ro Khanna – Chairman of the Subcommittee on Environment – took the pledge. 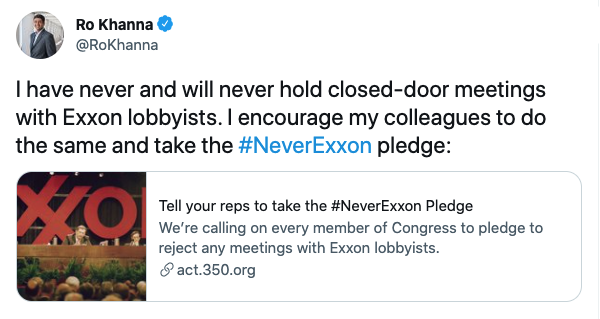 We’re asking you – John – to join other 350 supporters in Philadelphia to put the pressure on Rep. Boyle and Sens. Casey and Toomey. Together we can get more commitments and lessen the influence of big oil lobbyists on our democracy.

Will you send a message to Rep. Boyle and Sens. Casey and Toomey right now asking them to publicly take the #NeverExxon pledge?

We’ve known for decades that Exxon has bought off our politicians and used dark money to spread disinformation about the climate crisis. This is Exxon being Exxon: knowingly destroying our communities to profit from climate destruction.

But we’re done with the elected officials who continue to have secret meetings with Exxon lobbyists – enough is enough.

Exxon’s deception on the climate crisis is well-documented and any coordination with them is a direct affront to our democracy and the communities around the country who are suffering devastating heat waves, fires, and floods.

Please send a message to your members of Congress now urging them to immediately investigate Exxon and publicly take the #NeverExxon pledge to reject any meeting requests from Exxon lobbyists.

We’ve known for decades that this dark underbelly of Washington is one of the biggest impediments to climate action. Now it’s time for accountability.