This month, we celebrate the many contributions of the LGBTQ+ Americans in Delaware and across the country.

I’m proud to have a president who celebrates our country’s diverse and vibrant LGBTQ+ community and is committed to securing equal rights for all Americans. The Biden Administration has been described as the most pro-LGBTQ+ White House Administration in U.S. history -- it has brought aboard LGBTQ+ officials and cabinet members and reversed the Trump Administration’s anti-LGBTQ+ policies like the ban on transgender Americans openly serving in the military.

But while we celebrate the progress we’ve made, we must not forget about the work that still needs to be done to achieve true equality for all and that work cannot be confined to one month out of the year. It’s a year-round fight.

While our state provides full anti-discrimination protections for LGBTQ+ Delawareans, the same can’t be said for many other states across the country. That’s why I’m a proud co-sponsor of the Equality Act, which would enact nationwide protections against discrimination for LGBTQ+ Americans in the workplace, health care, education, housing, and more.

This Pride Month, add your name to mine and sign on your support for equal rights for all LGBTQ+ Americans >> [[link removed]] 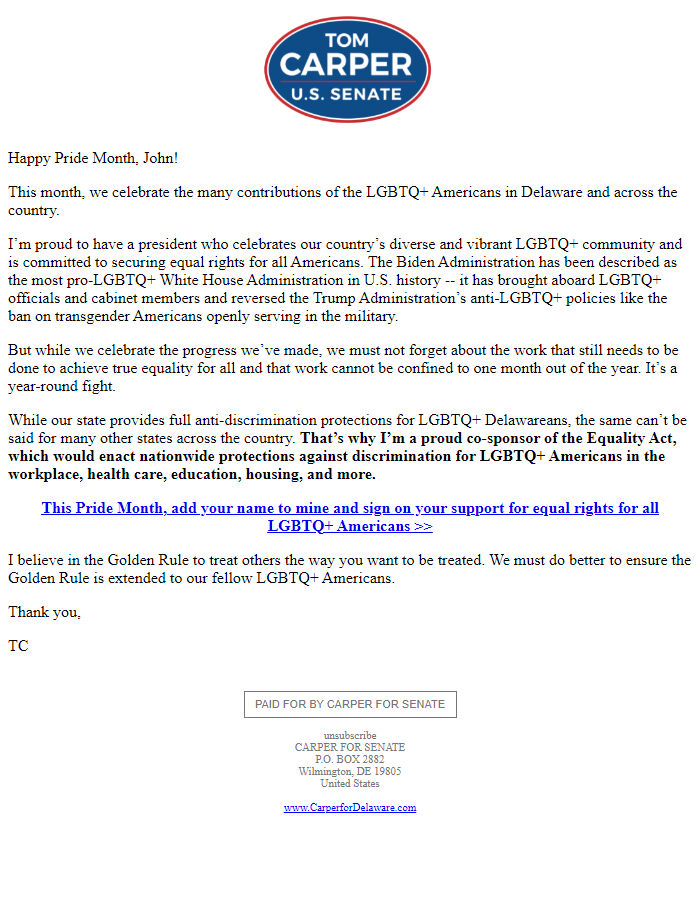