Can you help us put more pressure on the UK government to end its
support for the war in Yemen?

Thousands of people have already signed our open letter to Boris
Johnson – will you add your name
( [link removed] )
?

New figures published this week show that the UK government
licensed arms exports worth more than £1.65 billion to Saudi
Arabia and the UAE in the second half of 2020.

This represents a massive 50x increase over those issued in the
six months before.

Why the change? In 2019, legal action by CAAT had forced the
government to stop issuing export licences for weapons that could
be used in the war in Yemen. Hundreds of millions of pounds of
arms sales were put on hold.

But in July 2020 the government gave itself the all clear and
resumed arms sales. It immediately began ‘clearing the backlog’
of licence applications. The government is once again sending
more weapons to continue the deadly conflict in Yemen.

CAAT has launched a new legal challenge to this decision which we
hope will stop these sales, and others like it, once and for all.

But political pressure is also needed now. Yemen is facing the
worst famine the world has seen in decades: the UK government
should focus on meeting humanitarian needs and supporting peace,
not fuelling war.


Thank you for your support.

P.S. Good news - MPs will hold a debate on the arms trade and
Yemen next Tuesday evening. Please show your support for action
ahead of the debate by supporting our Open Letter.
( [link removed] )
--
To view this message in a browser: [link removed]
To unsubscribe from this mailing list, email [email protected]
To opt out of all our mailing lists, email [email protected] 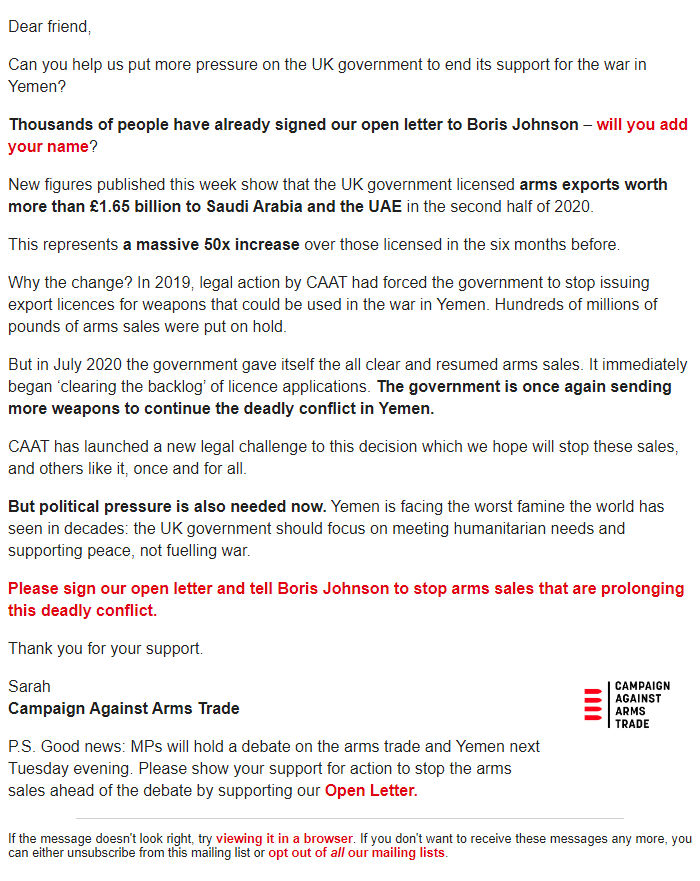