Arlington Young Democrats
Links have been removed from this email. Learn more in the FAQ.
Links have been removed from this email. Learn more in the FAQ.
[link removed] [[link removed]]
Arlington Young Democrats Condemn AAPI Targeted Hate Speech and Domestic Terrorism
The Arlington Young Democrats strongly condemn recent violent attacks against members of the Asian Americans and Pacific Islander (AAPI) community, particularly in the wake of right-wing figures amplifying COVID-related hate and aggression towards Asian Americans. Anti-AAPI rhetoric and tropes have existed in this country for decades, but recent escalations have demonstrated that xenophobia, sinophobia, and white nationalism all lead to the terror that occurred last night in Georgia. We cannot stand on the sidelines and wait for the next American tragedy to occur in order to take action against these systems. We will not be bystanders.
While the exact motive for the March 16th mass shooting event in Atlanta, GA remains under investigation, it is highly likely that anti-AAPI sentiment and misogyny played an intersecting role in the motivations of the attacker and in the narratives of a broader community in our country. The over-sexualization and sexual violence in the United States towards AAPI women and those who present as female has been an unacceptable issue that requires us all to stay vigilant. We must protect those who are unnecessarily put into harm’s way. We are also alarmed by the rising number of hate crimes that continue to plague our nation while going unnoticed by the media and our political leaders until it is too late. This is not acceptable.
The Arlington Young Democrats stand in complete solidarity with the AAPI community for their freedom to live in peace against right-wing scapegoating and hatred, and we stand in solidarity for a more equitable future for all Americans. Until liberty and justice ring true for all, we will always use our platform to include, uplift, and celebrate all communities while tirelessly working to disrupt and dismantle systems of white supremacy and toxic masculinity in all its forms.
In solidarity,
Matt Royer
President, Arlington Young Democrats
[link removed] [[link removed]] [link removed] [[link removed]] [link removed] [[link removed]] arlingtonyoungdems.org [arlingtonyoungdems.org]
Arlington Young Democrats
1235 S Clark St #207, Arlington, VA 22202
If you believe you received this message in error or wish to no longer receive email from us, please unsubscribe: [link removed] . 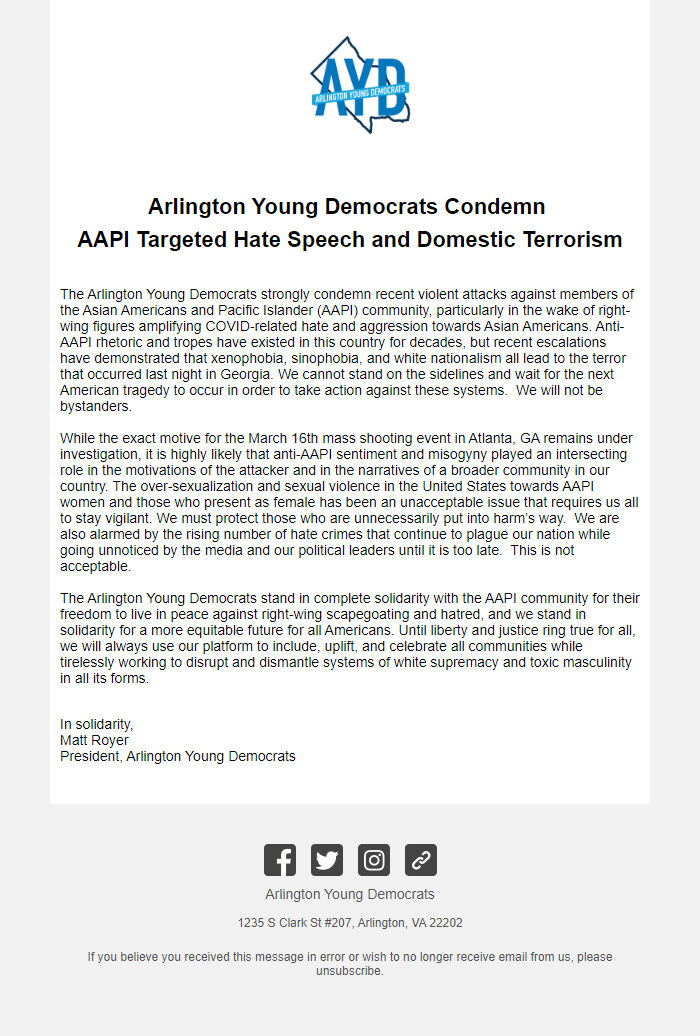