We're entering the final weekend of this campaign, and folks, I am just fired up. Thanks to the support of this grassroots team, we've turned this race into the closest in the entire country. We have a real shot at flipping this seat and taking back the Senate majority, and I'm fighting like heck for every vote.

But I sure can't win this thing alone. And before Election Day, we have one more test of this grassroots team's strength -- our final end-of-month deadline is tomorrow at midnight. We need to raise $500,000 to power this campaign to the end, but right now we're not on track to hit it.

We can't afford to come up even one dollar short with Mitch McConnell and his allies spending more than $85 MILLION to defeat us. And the latest polls show the attacks are working. I'm trailing my Republican opponent by ONE point, and we're running out of time to close the gap.

Look folks, we knew flipping this seat would be a tough fight. But you can bet we're giving it everything we've got. You've always had my back before, but I need your support more than ever if we're going to turn this toss up race into a win.

If you're fired up and fighting like heck to take back the Senate, will you rush a donation of $5, or whatever you can, to help us hit our final end-of-month goal by tomorrow at midnight? >> [link removed]

Paid for by Theresa Greenfield for Iowa

Contributions or gifts to Theresa Greenfield for Iowa are not tax deductible.

If this is not your preferred email address, please update your information here: [link removed]

To unsubscribe, go to:
[link removed] 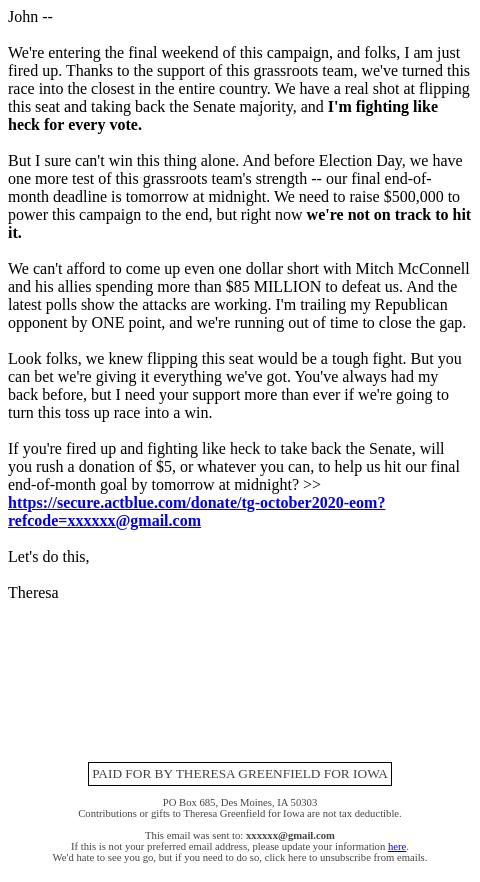