Statement from the Chairman

Following Senator Kean’s twenty-year tenure in the Senate, rather than running off his accomplishments, he has resorted to relying on proven lies to attack his opponent Congressman Malinowski. Senator Kean knows that running based off his track record, he would not receive the support from his constituents, but only from his supporters at the pharmaceutical industry and NRA. Because of this, Senator Kean continues his attempt to convince voters that the debunked lie about Congressman Malinowski is legitimate. Senator Kean should be ashamed not only that he thinks his constituents would believe this smear campaign, but of using dangerous language to accuse the Congressman of any involvement.

Here are the facts; Congressman Malinowski spent his career at the Human Rights Watch (HRW) and as Assistant Secretary of State fighting against this very abuse solely on a foreign policy level and was not involved in domestic projects. His absence in this matter was further confirmed as seen in this NJGlobe article, by a HRW lobbyist who worked on this project. Congressman Malinowski has shown that his campaign does not need to rely on spreading misinformation, but instead focus on the issues that matter. His tireless work over the past two years alone on the Gateway Project, restoring the SALT deduction and now helping our economy and small businesses recover are proof enough that his service to his district does not need to succumb to desperate attempts.

I denounce Senator Kean’s ad and call for its immediate removal. If he does not denounce the ad himself and have it removed, his message is clear – Senator Kean will continue to base his campaign solely on lies and conspiracies.

Not in our Chairman's Club? Join HERE and get exclusive discounts to all of our events and access to free Chairman's Club only events. [[link removed]] 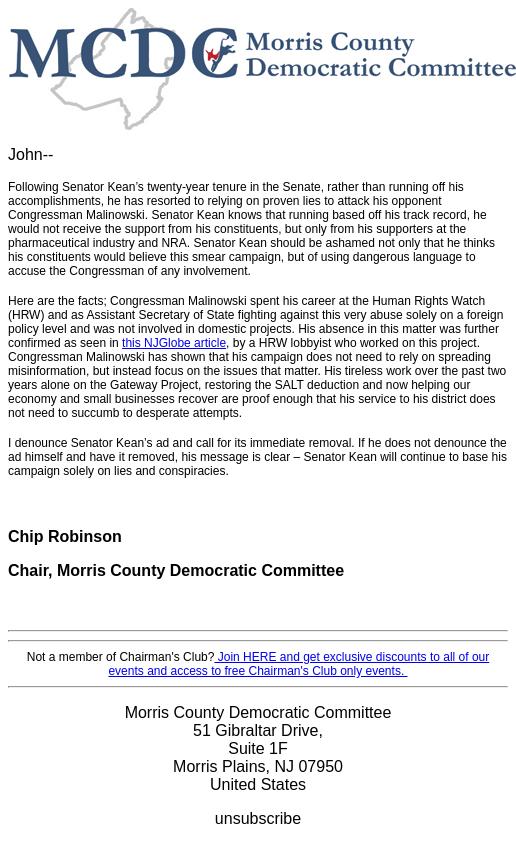