Is your big belly really a "Swollen Colon?”

“Out, out, damn poop!”
- With apologies to William Shakespeare’s
Macbeth (Act 5, Scene 1)
A medical study recently has confirmed what you may have always suspected: that most people are full of ... well, poop.
In a study of autopsies ([link removed]), examiners found that 90% of the cadavers’ colons held an average of 5 to 20 pounds of hardened, decayed feces which were encrusted in layers on the intestine walls.
Extrapolating this on the living population, it means that a staggering number of adults (including you) are walking around with a backed-up bowel that holds pounds of old, impacted feces that is protruding their bellies and secretly making them ill.
This was confirmed by a European medical study ([link removed]) which found that a whopping 62% of adults whom doctors examined had an average of 10-12 pounds of residual fecal matter buildup in their large intestines and rectums.
Obviously, the majority of people today are not completely emptying their bowels of noxious waste products everyday as nature intended.
But when the doctors gave these poor people a treatment of a special all-natural colon-cleansing substance ([link removed]) (not a laxative!), their bowel mass was reduced from 42% to 17%. This is an amazing reduction!
Not only were they able to completely empty their bowels, but this do-it-yourself treatment re-established their natural bowel rhythm so they remained “clean and regular” afterward.
In addition to much easier bowel movements, the patients reported feeling thinner, lighter, healthier and more energized.
Click here to read about the powerful “colon cleanser” that’s so gentle, you can use it every day until you’re “naturally regular” again. ([link removed])

You are subscribed to this email as [email protected] Click here to modify your preferences [link removed] or unsubscribe [link removed]. 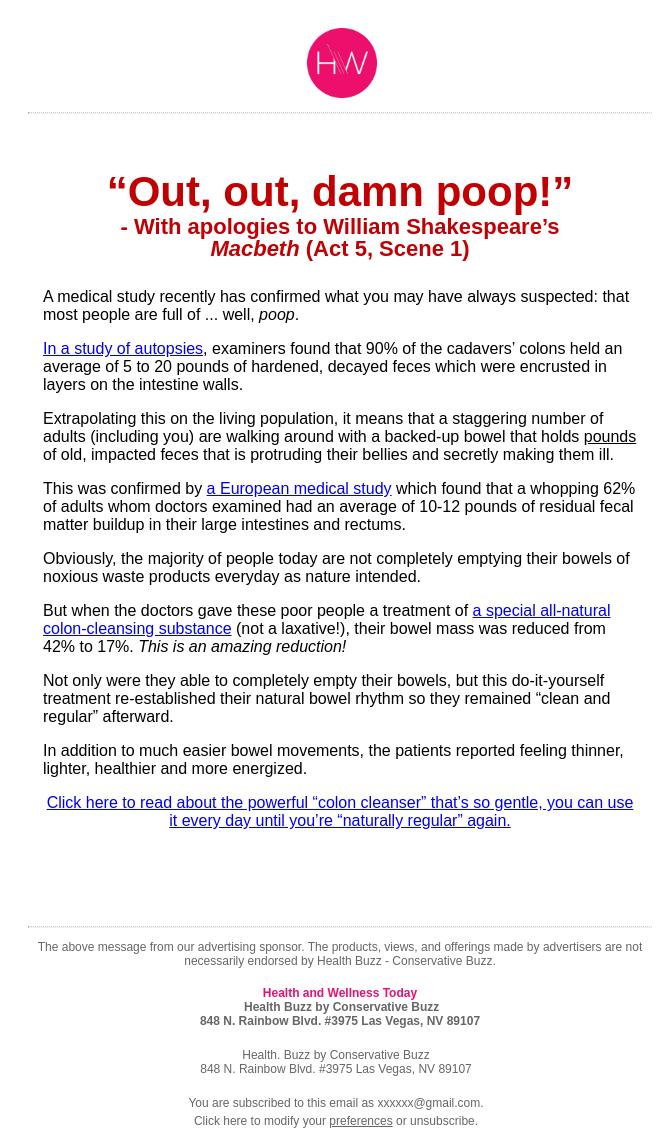